The view from the balcony at Riverside Church.

“The Riverside Church is an interdenominational, interracial, international congregation which strives to be open, affirming and welcoming.” If there’s anything this church wants you to remember about them, it’s that. The message, or a variation of it, appears in worship folders, pamphlets, bulletins, on website, and the staff and volunteers will say it, too. Our tour guide, after the service, told us this is something of which they’re proud. It is evident that the church lives by this ideal, you can see it and you can feel it as you look around.

I’ve been fortunate to visit a great number of sacred spaces throughout Manhattan this week, and they’re all beautiful and awe-inspiring in their own right. But it’s been clear that it’s the people who gather there and form those communities that give these spaces life and meaning. Riverside Church is such a place. Yes, the building is as amazing as you can imagine a Rockefeller funded church to be. But it’s the church’s people and vision, from it’s very beginning until today, that makes it matter. A list of notable speakers at Riverside includes Martin Luther King Jr., Cesar Chavez, Desmond Tutu, Nelson Mandela, Reinhold Niebuhr, and Dietrich Bonhoeffer, to name only a few. And today I had the privilege of hearing the Rev. Al Sharpton deliver a powerful message, entitled, “God is Here,” which was also the theme for the whole service.

After a few initial words, Rev. Sharpton addressed the incident a just a few days ago of Eric Garner’s death, resulting from an argument with the police and ending in his death as a result of a police chokehold. This is a devastating incident that has New Yorkers reeling over racial tensions and excessive use force by the police. When Rev. Sharpton received the news, he said, “My mind went back twenty years ago, where I went to the same Staten Island, same precinct, young man named Ernest Sayon had been killed by police men in an altercation very similar. The march that weekend was led by myself and others, the march yesterday, led by myself and others. Twenty years ago, the mayor’s name was Giuliani, the commisioner’s name was Bratton. Twenty years later, the mayor’s name is DiBlasio, the commisioner’s name is Bratton. There’s a lot different twenty years later, yet, we will see if a lot remains the same. One thing that is different is that there’s a video this time.”

Rev. Sharpton went on to talk about the thing that bothers him most in the face of this tragedy, the fact that the nation does not seem to react with a sense of humanity. “Have we gotten so cold and withdrawn?” he says, and he continues, “And does the faith community this morning, churches all over the city of New York gathered, do we deal with this moment with impeccable laryngitis, not even addressing what children in the streets see?” “God is here?” he wondered. And then he added, “Well, maybe the reason people doubt it is those of us who claim to represent God show up missing in action.”

Rev. Sharpton’s faith demands action. It is a faith that is evidenced by advocacy in favor of the opressed, by fighting for justice. President Obama, speaking about Sharpton, is quoted as saying he is “the voice of the voiceless and a champion for the downtrodden.” Sharpton’s faith and social justice work are deeply intertwined. When he talks about gun violence in cities like Chicago, he says, “God is here? Well, where are the representatives of God?” He continues, “We’re comparing notes, like were in some Olympic competition of murder, seeing which city has the worst gun violence. Yet, the people of faith have not challenged gun manufacturers, have not challenged the congress that will not even pass background checks. Can you imagine members of congress that want photo ID to vote but no background checks to buy a gun?” 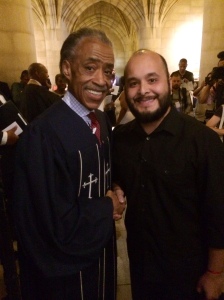 It was honor to meet Rev. Sharpton and shake his hand.

I find this approach to faith very compelling. Rev. Sharpton talks about a faith that demands involvement in our communities, a faith that is shown by how we fight for equality and justice. This is a faith that doesn’t shy away from getting involved in the political system, where change can actually be made. The way we know God is here, he contends, is by how God works through us to effect change. He remembers a time when, whatever happened in the world, there were people of faith leading the way and setting a moral tone. He laments the fact that while on one side of the Manhattan the economy is booming, on the other side people are starving. “Same island!” he remarks. “Yet we take our Bibles on Sunday morning and we get our favorite hymns ready. And we sing to a God beyond the sky. But I’ve come to tell you, God is not up here, he’s down here.” And if God is down here, he continues, “He knows what we did and what we didn’t do.”

“God is here. But, are you here with God?” asked Sharpton. “And if you are how is that demonstrated in your life? What have you done to enhance social fairness, social justice and equality. God gave you life so you could bless other lives.”
YOU CAN WATCH THE WHOLE SERVICE AT RIVERSIDE CHURCH’S WEBSITE!

If you don’t have a lot of time, start at 00:39 for an excellent introduction by The Rev. James A. Forbes, or skip to 00:54 to where Rev. Sharpton’s message begins.