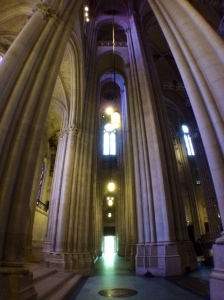 When I think of Gothic cathedrals, I tend to think of those imposing, majestic feats of architecture dating back from the 12th to the 16th century. As I arrived at The Cathedral Church of Saint John the Divine, I was immediately captivated by its magnitude and splendor. To my (very) untrained eye, it seemed like a structure that had stood in its place for a few centuries, if not as long as the city itself. But as the tour began, I quickly learned -much to my surprise- that not only is it a fairly recent building, but it is also still under construction. In his guide of Manhattan’s worship, “From Abyssinian to Zion,” David W. Dunlap says, “Wandering among the giant columns of one of the world’s largest cathedrals is an experience akin to an awe-struck journey through a grove of sequoias. But after 112 years -and counting- it is far from finished.” (My edition is 10 years old, so it’s actually 122 years and counting.) I don’t have the knowledge or the vocabulary to describe the sense of vastness I experienced walking through this Cathedral. For a little over an hour, as I admired the stained glass, the seven chapels, the craftsmanship and the sheer size of this place; I didn’t need to believe in something greater than myself, I could see it with my own eyes and walk it with my own feet. The very physical experience of feeling so small in a sacred space instills in me a sense of awe and wonderment. And I imagine that is part of the idea behind these massive structures, to remind us that God is greater than we can ever comprehend. The tour guide referred to it as “an unfinished cathedral” a number of times, and I found that an interesting point. Is anything ever finished? 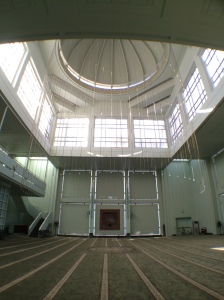 Light upon light at the Islamic Cultural Center of New York.

On a much smaller scale, but equally captivating, the Islamic Cultural Center of New York is a sight to behold. This is a decidedly modern house of prayer, and it is one that I found particularly compelling. I arrived fifteen or twenty minutes before Thuhur, midday prayer. People were already beginning to congregate in the lower part of the building where a smaller prayer hall is located. I asked if I could visit the main space in the upper level and a staff member kindly escorted me to it and let me in. As he opened the door, I was suddenly bathed in sunlight and struck by the openness of this place. I had seen photographs of this hall and I had read Dunlap’s description, but nothing could have prepared me for what I was seeing with my own eyes. The mihrab (the niche tht points toward Mecca) is framed by inscriptions from the Quran, which I later learned include “Light upon Light; God guides to his light whom he will.” Here was another sacred space building on the theme of vastness and openness, only this one in contrast with the Cathedral I visited earlier was filled with natural light. In his description, Dunlap talks about the simplicity of this design as a necessity for avoiding national attributes due to its dependence on support from many Islamic countries. But he also notes that, “Simplicity also encourages meditation.” I would’ve loved to stay longer, but my host reminded me it was time to go to prayer.

The office for the Interfaith Center of New York is located within the 19-story Interchurch Center building. It was a busy time when I arrived, but Dr. Sarah Sayeed was very gracious to sit down and chat with me for a little while. Dr. Sayeed, Director of Community Partnerships, is one of six staff members at the Center. It is a small but very mighty group with year-round programs and initiatives. One of their primary focuses is religious diversity training for teachers, social workers and other professionals. Dr. Sayeed tells me they strive to teach “Religion as it is lived, not as it is found in a textbook.” The other main focus of the Center is to create opportunities for religious leaders to come together, as she says, “Not to talk theology, but to address problems.” The Center is concerned with finding ways for religious groups to work together toward solving problems. I want to understand why the Center avoids theological discussions and she explains that every faith has within its ranks interpretive strands that don’t wish to participate in interfaith work. This is something I’ve been wondering about, what it’s like to be committed to interfaith work and to one’s own faith. I’m stumbling trying to put my question into words, and she helps me out, “We do interfaith, not interproselytizing.” 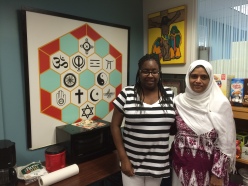 My impression is that people who are passionate about interfaith dialogue and work, are also deeply committed to their own faith. How then, I wonder, is a devout practitioner able to entertain theological views that are potentially diametrically opposed to her own? We are talking about dialogue, not mere tolerance, and to me that involves being able to hold opposing views in one’s mind. “Because of their own commitment to faith,” she tells me, “people understand that worship has meaning.” That is, because devoted people understand the value and meaning of their own faith, they are able to relate to the the value and meaning of the faith of others. Not only that, they are capable of appreciating the other’s faith. I ask Dr. Sayeed what she thinks is one of the most common misperceptions about interfaith work. “People think interfaith is about syncretizing or washing over differences,” she tells me. I’ve experienced this in diversity initiatives in the past, the notion that we should focus on our similarities and ignore our differences. And I’ve seen the concept of inclusion, to varying degrees of success, address this “washing over” in diversity work. Interfaith work acknowledges and upholds the values and ideas that are unique to each faith, but interfaith advocates see that there is real progress to be made in working together from a commonly shared foundation. “All faiths share a commitment to social justice,” says Dr. Sayeed. In my brief time learning about other faiths, I have found this to be true.

My day ended with the Ramadan Iftar Dinner jointly organized by the Interfaith Center of New York, Peace Islands Institute and Union Theological Seminary. Hosted by the Seminary in a beautiful room, the evening was a time of learning, celebration and joyous fellowship. Iftar is a communal breaking of the fast for Muslims during the holy month of Ramadan. This event, however, was an interfaith Iftar dinner and so Muslims, Jews, Christians, and Buddhists, to mention a few, were in attendance. I’ve already lost track of how many “firsts” I’ve experience along this journey, but I can tell you I sat at a dinner table last night next to a Rabbi and an Imam. Overhearing them talking and sharing an occasional joke, was very significant to me for some reason I can’t explain. Dr. Sayeed offered opening remarks. Mary Boys, Dean Professor of Practical Theology at UTS, delivered a few words as well. She talked about the study of interreligious engagement and she also remarked that, “religious people eat well together.” Imam Ibrahim Sayar, of Peace Islands Institute shared some remarks as well. He would later come back to deliver a call to prayer. There was lovely music performed by an oud and frame drum ensemble, which was followed by a video presentation titled, “Journey of Fasting.” Professor Jerusha Lamptey, from UTS, was the keynote speaker. She talked about what it means to fast and about how Ramadan is “A time out to realign our priorities, to find equilibrium and balance in life.” The time for Maghrib, when the fast is broken with dates and water, arrived as Professor Lamptey concluded her presentation. Muslim, as well as non-Muslim, brothers and sisters began taking small bites of dates from a common bowl at each table. 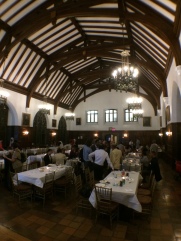 Following Imam Sayar’s call to prayer, the food line was opened. Non-Muslims proceeded toward the food while Muslims left to a designated space for prayer to return a few minutes later. The rest of the evening was filled with conversation, laughter, smiles and of course, food! As I looked around the room I couldn’t help but feel incredibly fortunate for this precious human existence, how lucky to be in this room and share a meal with these brothers and sisters. As the evening came to a close, I was also filled with gratitude and emotion. More than ever before, I felt a great sense of belonging, I felt at home within this great, global family.