“Someone who has the time and the space to think about the mystery,” is how Rev. Lance Schmitz responds when I ask him to define his role as a pastor. I’m captivated by this idea of “the mystery,” because the experience of God that I’m seeking to grasp differs from one person to the next, and it’s beginning to feel like a mystery we’re all trying to solve. Lance tells me his role is about helping others figure out how God interacts in the world and in their lives. He tells me he sees himself as one who is ahead of the way, leading others, but not because he thinks he is any better, “it’s just that I’ve got the time and the space afforded to me to be a person that shares hope, that shares the Good News.” I’m beginning to think he is a few clues ahead of me.

I think I know what he means when he talks about “the Good News,” after all we were religion majors and ministry interns together nearly fifteen years ago. But the way he explains the Good News today is a bit different than how I would’ve explained it as a junior in college. “Yes, in the Christian sense of Good News, but also in the sense of good news like, it’s gonna work out somehow,” he says, “and I’m fairly certain that it will work out.” For Lance, living out the Good News means being deeply engaged with his community, “helping see where hope is breaking in around us, so that others can also be engaged and involved.” The mystery and the lofty thinking, they are deeply intertwined with a very earthy humanity in his brand of ministry. Being present, being ready and available, and officiating over milestone moments such as births, weddings and funerals, seem to him as significant as contemplating “the ineffable mystery of God.”

I’m hanging on to every word Lance speaks; this is most certainly Good News! But the ministry is not all hope and happiness. “Being a minister is a very lonely profession. This is the side that people don’t talk about,” he tells me. I’m more than a bit shocked as I hear him explain that clergy have some of the highest rates of depression, substance abuse and even suicide. When I think of a pastor, I see someone constantly surrounded by people, how on earth could a pastor ever feel lonely? “You’re surrounded by people, but you have few friends,” he says. This is why, he tells me, it’s very important for a minister to seek friendships outside of their own congregations, because the risk of creating the appearance of allegiances or favoritism within the church is too great and too costly. 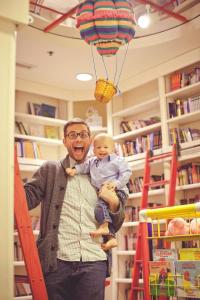 When asked what he is grateful for, Lance looked at his son who was sitting in his lap and said, “This.”

Lance left his circle of friends, or as he says, his “community of reference,” back in Oklahoma City, where he used to live and pastor. Late last year he, his wife and their son moved to Kansas City where Lance is pastor at Rosedale Congregational Church, UCC. This is his first time working outside of the Nazarene Church, the denomination in which he first found his faith and the denomination in which he prepared and served until now. He explains the way the United Church of Christ (UCC) operates and how it allows for a diverse range of beliefs and approaches to ministry. I ask him what is the common ground or unifying thread in a Church that allows for so much plurality. “It’s not just one thing…a lot of it is tradition, the way of organizing life through liturgy, but also this idea that Jesus is Lord. What that means for people can vary, but there’s this idea that Jesus is whom we organize our life around.”

Lately I’ve noticed a lot of people saying things like, “I’m spiritual, not religious,” and, “I don’t have a religion, I have a relationship.” As I hear Lance talk about his faith and his views, I wonder what he makes of all this. “I consider myself a very religious person. I need religion, I need structures and routines to help me be the person I think God is calling me to be.” This is not exactly the answer I was expecting, so he explains, “Religion is what binds me to other people, it is a system and a structure that helps me transmit my values through time.” As one who loves religion(s), this is music to my ears. I understand why so many people speak of religion disdainfully, but I still believe there is something of awe and wonderment in religion that we can at least appreciate, and it worries me to see religion so easily dismissed. “Christianity is a religion – there are agreed-upon systems of belief. And I understand the sentiment behind ‘I have a relationship, not a religion,’ it just doesn’t speak to me. I’m profoundly religious. Religion is a word that means ‘to bind together,’ and that’s what I need – a system and a structure to help me bind myself to God and to others.”

As I’ve been talking to people of faith in the past few weeks, one of my favorite things to ask is how they experience God. Because Lance has talked about “the mystery,” I’m surprised yet again by his answer. He talks about social work, about church members sacking groceries for inner city families. I tell Lance that his examples of “God experiences” sound very human and very natural. “Sacking groceries is as supernatural to me as some sort of feeling that happens during a church service. I feel those moments just as much in a wonderful service as I do in the humdrum, day-to-day. God can be experienced anywhere if we just have the patience to slow down.”

An hour later I feel like maybe I’ve unlocked a few more clues, I’m getting closer to figuring out this mystery. But every question seems to give birth to three more questions, and Lance is perfectly comfortable with questions; he actually seems to thrive in them. “I don’t know what it is, and I’m okay with that. God is not some scientific formula to be figured out. God is to me something bigger. I have no problem with questions, doubt is not the enemy of faith.” “Whoa! Can you tell me more about that,” I ask. He replies, “you can’t have any answers unless you have questions, and part of the fun is trying to figure it out. I mean, Neil deGrasse Tyson has made me love God more because he has good questions. And I realize that faith is not science. Science is true whether I believe it or not, faith is not the same way. Faith is bigger than that.” And so, the mystery remains.