The Who & The What, Museum of Biblical Art (MOBIA)

Faith, family, gender and cultural identity are explored in “The Who & The What,” a play at once moving and thought provoking. It is the story of a devout muslim man and his two adult daughters. We learn early on that the mother has passed on, a victim of cancer. Zarina, the oldest, is a writer with a very progressive and human understanding of the Prophet. When her sister, Mahwish asks what the subject of her novel is, Zarina replies, “gender politics,” and then clarifies, “women and Islam.”

Because of my upbringing and my undergraduate studies, I’m much more steeped in Christianity than in any other religious tradition. I’ve learned quite a bit about Buddhism over the past couple of years, but I’m very much still a beginner. When it comes to Islam, I’ve barely scratched the surface. In my reading of the Holy Quran, however, there are matters of gender disparity that I’m still struggling to understand. So I found myself identifying with Zarina and her theories about the Prophet and the revelation. But of course, most of the audience seemed to identify with her too.

Afzal is a loving father who has sacrificed so much for his family and who’s only desire is to see his daughters happy. But his conservative views and Zarina’s liberal views are diametrically opposed, and so conflict arises. Over the course of two acts, we see the small family struggle with tradition, with faith, with gender and generational differences. These are painfully divisive matters for father and daughter and while there is some comedic relief, I found myself tearing up a few times (I’m sure the fact that I’ve missed my two daughters this week contributed a bit).

Not my photo. Taken from the Lincoln Center’s website.

I’m fascinated with the notion of struggling with one’s faith. For me it was an essential part of growing up and developing my identity. So, it was very interesting to see this struggle transpire, albeit on stage, within the context of a faith tradition other than my own. When Zarina’s father gets a hold of her manuscript and reads it, he is appalled and fearful not only that she may have blasphemed, but that there might be serious and fatal consequences as a result. I didn’t have to worry about that. When I struggled with my faith I was worried I might at worst offend someone and at best earn a spot on their prayer list. But Afzal is genuinely concerned that his daughter may bring physical harm upon herself. So, naturally, the implications of challenging traditional theological views are vastly different within the context of Islam.

Zarina stands by her claims that casting the Prophet under a more human light only makes him more remarkable. She contends that questioning longstanding assumptions is not disrespectful. She stands for inquiry while her father declares, “I have no questions.” Zarina’s faith is never at risk, in fact she ends up marrying an Imam. Rather, she struggles with her faith so that she may more fully own and express it. But the conflict is too great for this father-daughter relationship to bear and Afzal ends up banishing her from the family and he forbids Mahwish from ever mentioning her name. Where the play succeeds, for me, is that we are able to see both Afzal and Zarina objectively. He is not a bad father and she is not a bad daughter, they have just not been able to reconcile their differences. He struggles to uphold the faith of his ancestors while she tries to redefine the faith for a new, American reality. There is a semblance of a resolution in the end, but the struggle remains.

As I left the theater, I happened upon the Museum of Biblical Art. I hadn’t planned on visiting, in fact, I didn’t know about it. But I’m very glad to have happened upon it. The current exhibit, “Back to Eden: Contemporary Artists Wander the Garden,” is a collection of whimsical, poignant and unexpect takes on the themes of the Garden of Eden, paradise lost, temptation and the loss of innocence.

“Eden as the perfect natural paradise -now lost- is a significant metaphor for the conflicted relationship between humans and the natural world. The works in the exhibition illustrate ways in which we continue to attempt to recreate paradise in our gardens and surroundings, as wel as demonstrate the disastrous effects we have had on the environment.”

Since photography was allowed, I’m able to share with you two of my favorite pieces. 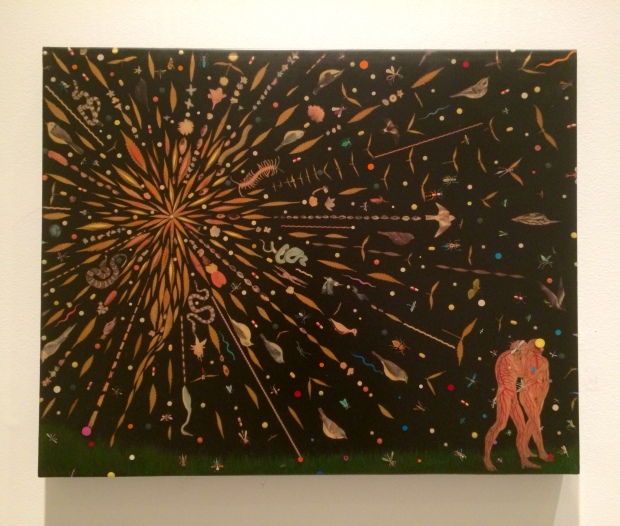 The figures of Adam and Eve are based on a fresco by the Italian Renaissance painter Masaccio, which Tomaselli chose for its particularly emotional rendering of the Expulsion. Through this iconic image, the artist considers the eternal human search to find paradise again.

Mark Dion
The Serpent Before the Fall
2014
Artificial and natural plants, wood, papier-maché, and magic sculpt

At the end of the Garden of Eden story, the serpent is cursed by God to crawl on its belly. Some have interpreted this to mean that previously the serpent had four legs. Mark Dion imagined such a creature in a display at a natural history museum, and brought that to fruition in his work.